China and the United States on May 1 or full navigation! Mutual recognition of vaccines and passports, without isolation. Global trade will continue to recover

China and the United States on May 1 or full navigation! Mutual recognition of vaccines and passports, without isolation. Global trade will continue to recover

China and the United States to open air links? When will US-China relations thaw? Here comes the big news!

According to the latest news, the US consulates may gradually resume immigrant visa interviews in late April. It is reported that so far, industry institutions have received the interview notice of American family reunion immigration customers, the interview time is arranged in late April.

This marks the first time that all regular visa interviews at U.S. embassies and consulates have been canceled since January 31, 2020. According to records, the last batch of clients interviewed for visas went back to late December 2019 and early January 2020.

According to foreign media, starting May 1, the United States may lift international travel restrictions. The mutual recognition of navigation and vaccine passports between China and the United States will not require isolation, and important progress may be made. 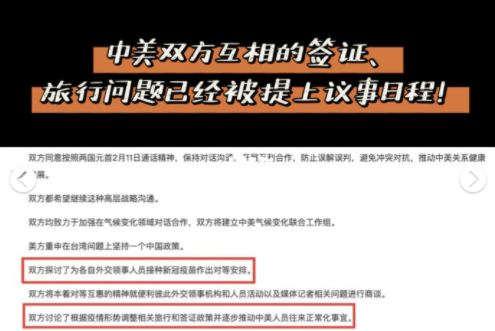 The US airline industry is urging the removal of entry restrictions

More than two dozen airline and travel industry groups want the White House to issue a policy that would exempt travelers who have been vaccinated against COVID-19 from testing. They also want the Centers for Disease Control and Prevention to say publicly that vaccinated people are safe to travel. At the same time, they urged the White House to actively implement a vaccine passport, which the White House opposes.

The groups say the measures will speed up the recovery of tourism and aviation. Tourism has been hit hard during the outbreak.

Air travel in America has started to pick up. On March 11, more than 1 million people passed through U.S. airports every day on March 28, according to the Transportation Security Administration. By March 28, the number was more than 1.5 million. That compares with 184,000 during the same period in 2020. Of course, current ridership in 2021 is still lower than in 2019, when daily passenger numbers fluctuated between 2.1 million and 2.6 million.

Groups calling for an easing of international restrictions include Airlines for America, the U.S. Travel Association and the U.S. Chamber of Commerce. They want the government to complete a draft by May 1 that would lift restrictions on international travel, especially between the United States and other regions such as Europe and China.

Nearly 45 million Americans, or more than 13 percent of the U.S. population, have been fully vaccinated, according to the Centers for Disease Control and Prevention.

There was no immediate response from the White House. But CDC officials said in a statement Monday that they are working on policies for those who will be vaccinated.

Boeing on Wednesday urged the US government to separate other issues such as human rights from its trade relationship with China, warning that European rival Airbus would benefit if the US planemaker was shut out of China, Reuters reported.

"We can't afford to be shut out of this market [China]," Boeing CEO Dave Calhoun told an aviation summit hosted by the U.S. Chamber of Commerce on Wednesday, Bloomberg reported. Our competitors will jump in and there will be no gain from restricting trade."

He added: "I hope we can separate intellectual property, human rights and other things from trade and continue to encourage a free trade environment between these two economic giants. We cannot afford to lose the Chinese market."

Boeing and Airbus account for a quarter of their orders in China, and the country's domestic tourism market has overtaken the United States to become the world's largest, according to Reuters.

The United States and China engaged in an 18-month trade war under former President Donald Trump, and Boeing has faced questions about its market share in China. According to data on Boeing's website, the company has not received any orders for the 737Max aircraft from China, a crucial market, during the Trump administration, Bloomberg said.

Global trade will continue to recover

Global trade in goods is expected to grow by 8.0% this year and 4.0% next year, the World Trade Organization (WTO) said in a report released Wednesday.

According to the annual "Global Trade Data and Prospects" report released by the WTO on the same day, from the regional point of view, affected by the large-scale fiscal stimulus policies of the United States, North America will become the main region to drive the demand for global trade in goods in 2021. The volume of goods exported from Asia is expected to grow 8.4 percent, making it one of the fastest growing regions in the world.

According to the report, global trade in goods will decline by 5.3 percent in 2020 due to the COVID-19 pandemic, but this performance is better than the 9.2 percent decline forecast by the WTO last October. The WTO believes that positive news on COVID-19 vaccine, fiscal and monetary policies in several economies, and effective outbreak control measures and economic slowdown in China and other Asian economies have boosted demand for global trade and prevented a more severe recession in global trade.